In 2006 when we launched Snapvine’s first viral widget and phone app for teens, it went viral overnight. We were overwhelmed with success within 3 weeks: our servers were swamped with signups - 1 million of them within the first 7 weeks. This was one of those “good problems to have” – so “good” in fact we had to turn off sign ups 25% of the time over those first few weeks. The problem was, our entire team turned into a band of maniacal database tuning, code-optimizing, high scale server junkies.

So my dilemma became: How do you take a team that’s swamped with work and make them become incredibly customer focused overnight?

Our solution? every day, print out a few hundred new user photo thumbnails and post them on the walls. As the days passed, the number of photo pages grew, and even if you were an engineer consumed with debugging some MySql indexes, you became intensely curious about the users: real people with faces, smiles. Who were they? Why were they signing up? What did they want to see next?

As a result, everyone pushed for more focus on user stories and learning more about our users and what they wanted to see next. We instituted a weekly standing focus group, sourced from Craigslist by our do-it-all office admin, and watched them use the product and listened to their reactions to our new feature ideas.

Print out your user’s photos and line the walls with them. I think any startup can use this simple technique to make everyone on the team more user focused. If you don’t capture photos as part of your product, pick some new users every day, email them and ask them to send some in. I promise, it will pay off. 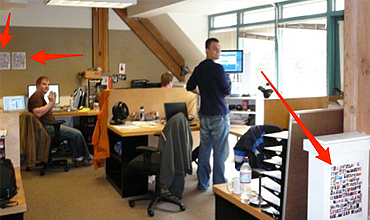